The 88 Constellations and Their Brightest Stars 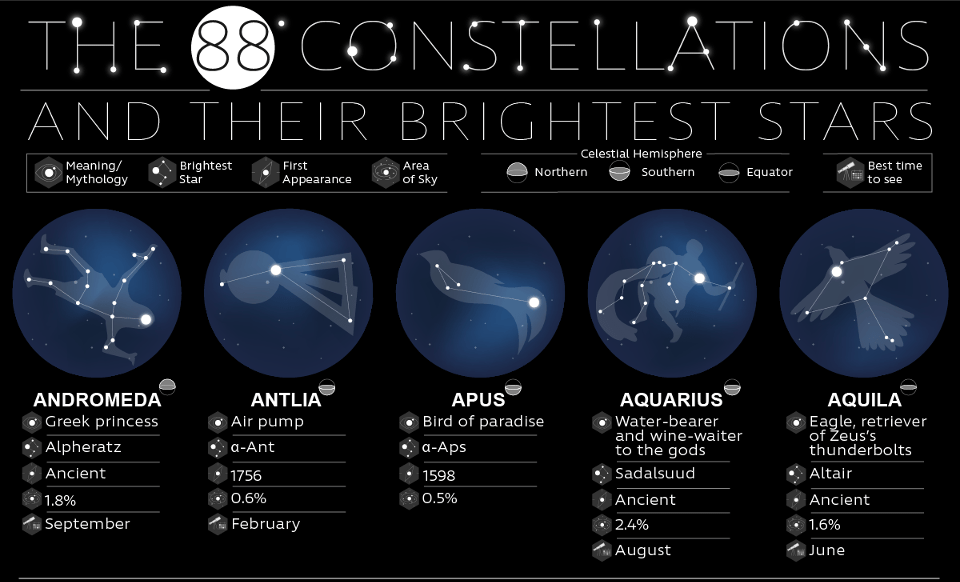 In contemporary astrology, there are 88 constellations that are recognized by the International Astronomical Union. 42 depict animals, 29 depict inanimate objects and 17 depict humans or mythological characters.

The ancient Sumerians, Babylonians, and later, the Greeks established the majority of the northern constellations that are officially recognized today. That is why many stars and constellations are connected to ancient myths and legends. For example, the Lyre constellation represents the celestial harp created by Hermes and gifted to Orpheus by Apollo. When Orpheus played love songs to his beloved bride Eurydice, both people and animals would become captivated. When Eurydice died suddenly, Orpheus’ enchanting lyre music convinced the ruler of the underworld to release Eurydice under the condition that Orpheus does not look back at her as she followed him out to the surface. Unable to endure the doubt that she was not behind him, he glanced over his shoulder and witnessed Eurydice fade away back into Hades’ domain. After Orpheus passed away, Zeus placed his lyre in the stars in honor of his beautiful music and forsaken love.

Read more of this article and see images of all 88 constellations.

Watch the Transit of Mercury

The Transit of Mercury 2019

History of the ASN

My Approach to Astrophotography

Sirius and the Big Dog Constellation

My Experience with the ASN

Getting Busy with ASN

What is Afocal Imaging?

Share your wonder of the universe with friendly, like-minded people who love to gaze at the stars and planets. Perks include regularly scheduled ASN sponsored Star Parties, meetings at UNR's Fleischmann Planetarium, discounts on Astronomy and Sky & Telescope magazines, and access to the ASN's periodic newsletter, The Asteroid. Join Us!